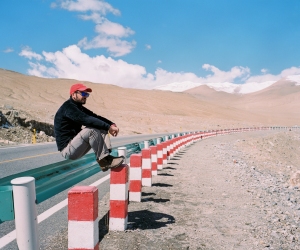 I lived in Asia for almost 10 years: first as a writer-in-residence in Kyoto, then as a teacher in Tokyo. I moved to Shanghai in 2011, where I taught philosophy and finished my Ph.D. After Singapore (2017-2019), I live now in London.

I have published over 14 books in French, including works of poetry, fiction, and literary criticism. Les Gestes impossibles (Flammarion, 2013) received an award from the French Academy (Académie française). Another has been translated into English by Andria Spring and Jean-Yves Vesseau under the title A New Celebration, Portrait(s) of Chongqing, and is illustrated by photographer Patrick Wack. My latest book is La Sauvagerie, a 500 ten-line poem book, featuring 50 poets from both France and Singapore (100 poems are bilingual fr/en). You can read online extracts from Le Confinement du Monde (translated by Joshua Ip).

I have translated into French Basil Chamberlain’s Kojiki (2011), Derek Walcott’s Morning, Paramin (2016) and wrote a philosophical investigation into T. S. Eliot’ s The Waste Land (2018). Recently was released my translation of the Chinese Shijing.

I am Chief editor of Catastrophes, a free, online, monthly French poetry magazine that specializes in serial poems, as well as translations from English, Mandarin, Italian and Spanish. The first issue was launched on October 1st, 2017.

You can email me at pierre.vinclair[at]yahoo.fr